Frequently I want to do a quick benchmark comparison of my functions. TIME is nice to get some data, but it's limited to a single run so there isn't really much of a statistical value in it. Trivial-benchmark runs a block of code many times and outputs some statistical data for it. On SBCL this includes the data from TIME, for all other implementations just the REAL- and RUN-TIME data. However, you can extend the system by adding your own metrics to it, or even by adding additional statistical computeations.

For basic throwaway benchmarking, the with-timing macro should suffice:

However, you can also do more complex timing using make-timer and with-sampling. The former creates a new timer object (with an optional list of metrics to sample) and the latter collects one sample for each metric of the timer for the duration of the body forms. 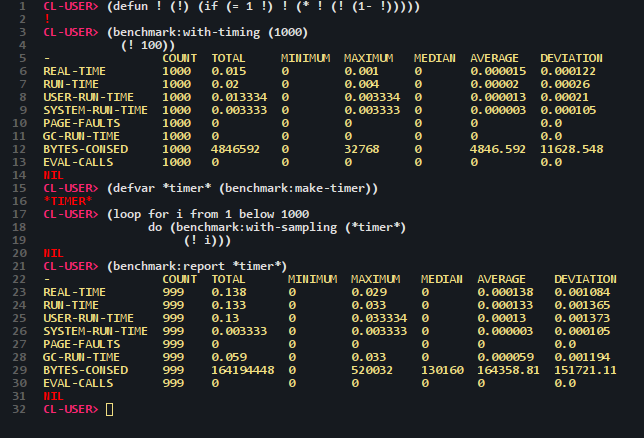 If you're interested in adding additional metrics, you'll want to take a look at the metric class, as well as the related methods, start discard commit take-sample samples sample-size condense reduce-samples compute report reset. For a basic metric, you only need to implement start, discard, commit, samples, and take-sample. The other functions have standard methods that will do their computations based on those five.

If you have a function that returns a current state of your sample and simply want to have the metric show the delta between start and commit, you can use define-delta-metric.

You can also implement a new computation type that is used to display the different metrics in the table. For that, simply write a method on compute with the name of your computation as an eql-specializer and then push the name onto *default-computations* so that it's always displayed when using report. As an example, the maximum is simply calculated as follows: